Difference between revisions of "Smart Voucher"

1: You as a Sponsor fund a Smart Voucher with at least $8 of Bytes. Let’s say you deposited $40 to the Smart Voucher to be able to fund five attestations at the same time. 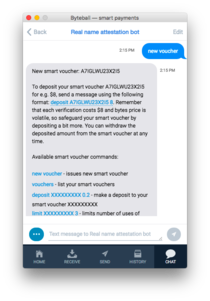 2: The Smart Voucher code is automatically created: it’s just a sequence of letters and digits that looks like VMJKYJGE3RUMT. You can now share it with whoever you feel like: a friend, colleague, family member, readers of your blog, viewers of your YouTube channel  etc.

3: Let’s say you share it with your brother Ben (referred user). He can then use that code instead of paying the $8 fee for a Real Name Attestation. For Ben, the Smart Voucher acts like a discount code, or a coupon, that entitles him to a 100% discount on real name attestation.

5: If Ben’s attestation is successful, his $20 attestation reward is split in two: $12 (in Bytes) is sent to a time-locked smart contract on Ben’s wallet. He can withdraw that amount 1 year later.

6: The other part of the attestation reward is a $8 reward. This part gets returned to your Voucher to reimburse you for the price of the successful attestation. You also receive a $20 referral reward. This gets sent to the same Smart Voucher and its entire balance ($60 in this example) can now be used to fund new attestation fees.

7: You (the Sponsor) can withdraw the amount you initially deposited directly to your wallet (but not exceeding the Smart Voucher balance). The Smart Voucher balance exceeding what you deposited to it (that is, your net earnings) can be withdrawn to a time-locked Smart Contract from which it can be withdrawn after 1 year. The smart contract is automatically created by the bot when it is first withdrawn to.