Difference between revisions of "Token" 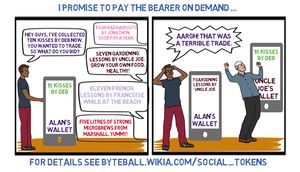 What advantages do Byteball tokens have over existing systems, like paper notes, plastic tokens, "indelible" ink on a user's skin (think a rock concert pass)?

There are five main token types in Byteball. Each is created and named/registered in the same way, but they have different uses. There are also tokens made with no purpose in mind deeper than simply making them.

Fun-coins deliberately have zero monetary value because they exist in vast quantity. They are intended mainly for practice with smart contracts, textcoins, or other Byteball features, where it doesn't matter if you mess up and lose them somehow. 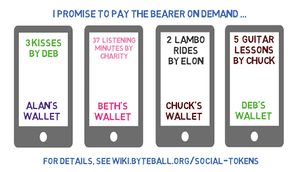 Byteball adoption will always be helped by one Byteball fan using the platform tokens (Fun-coins, Family Tokens, Social Tokens, Commercial Tokens) etc with their friends and family, and not just sitting on their GBytes wishing the price would go up more.